Sarah Crowder and Sophie Ioannou
A blog to go with the zine GUT FEELINGS. About food and everything else.

April is National Poetry month. You don't need me to fill this blog post up with my own clumsy words, just watch these videos of people who have mastered putting words together in beautiful ways.

This final poem is something I think lots of people should read or watch before they speak poetry in public.

Posted by Sarah Crowder and Sophie Ioannou at 17:40 No comments:

Kicking the Mickey Mouse Out Of Our Heads - Sophie.

Like many a kid, Walt Disney ruled my childhood. I would watch Beauty and the Beast four times a night, I dressed up as Princess Jazmine every day for a year and I am still utterly traumatised by the untimely death of Mufasa. When I think back on those sweet and easy times, I feel sentimental over the imagination with which I played and the innocence of the fantasy world I existed in. It was wonderful, it was filtered of conquering evil, it was safe. Any fears I did have were nothing a hug and a hot chocolate couldn't disperse.
But then real life started to seep its way in. Heartache, failure, disappointment, death and Hitler and terrorists and fucking horrible nightmares and war. Like a slow moving tidal wave of horror, it came with a vengeance to destroy the dream kingdom we spent so many years calling home and there was no one to slay the dragon and there was no one to rescue us from the tower.
The most heartbreaking part of it all was the unrealistic imitation of the fictitious good guy. Do you remember him? That great, triumphant dude of a man who we emulated for all those innocent years, the one with the sound morals and the good heart?...no?
Yes, well you probably don't remember him anymore because you've spent too many years doing terrible shitty things to people that feeling triumphantly good these days feels like a very faraway dream. Gradually over the years, the penchant for evil and trouble unmercifully weaved its way so deeply into your being and built a home right on top of your withering soul that you haven't really had time to face the fact that you now more closely resemble a Disney villain than your previous pursuits of wholesome greatness.
It doesn't stay that way. Trust me, the yearning to be the prince/princess that you started your life believing you were will come back because I've seen it happen too often. Every time a friend tells you that their 'not drinking for a bit' or their 'not coming out for a while', that is when it's happening. Just look at the smug expression on their stupid righteous faces.

A backlash was inevitable. Disney made everything so cute and lovely and left us completely unprepared for reality that we, naturally, started to pick holes in the wholesomeness of the Disney philosophy. There was something so enchantingly insidious about it. 'This character is a pedophile, that character is into beastility, just look at the way they've made his eyes so squinty, can't you see? isn't it obvious now?' We waged a full blown attack on the idyllic images that we couldn't possibly compete with as flawed adults and in turn the Cinderella tinted glasses gave way to ones that were a light shade of grey with a constant drizzle of rain. Unfortunately, this is the just the natural progression of things when a more favourable tint is removed.

It was this molly coddling nature that Charles Bukowsi fought against his whole writing career. To him, Mickey Mouse destroyed the soul of America. His wife, Linda, explained how Buk couldn't stand the fact that the power over multi millions of human beings was in the hands of this three-fingered son of a bitch. He was dedicated, whole heartedly, to the de-Disneyfication of us all and boy, did he succeed. Bukowski's America is the absolute antithesis of Walt Disney's. One of sex, violence and alcoholism. One where pretty horses can make your dreams come true if only you're willing to take a trip to the tracks every other day. Perhaps it was his lack of a childhood that spurred on his hatred, or perhaps he didn't want the children of America to be so shocked by the impulses of their souls. Either way, it horrified him that Mickey Mouse had a greater influence than 'Shakespeare, Milton, Dante, Rabelais, Shostakovitch, Lenin and Van Gogh. Which says what about the American public? Disneyland remands the central attraction of Southern California, but the graveyard remains our reality.'

Although it all sounds pretty bleak and miserable, perhaps he has a point. A frivolous, uncomplicated existence would feel like a soulless one. One thing ol' Mickey didn't teach us is that it's all peaks and troughs, kids. Life is beautiful but it's also fucking cruel. Sometimes things will go your way but most of the time, they probably won't. You will do terrible things, you will hurt the people you love and you will err on the side of Jafar. You'll probably, definitely also see some nasty shit going down on the side of the freeway but without getting all those horrible bits out of the way, how are you ever gonna build up the tenacity to be that good wholesome guy again? Y'know, that one you read about once, way back when...

Its the circle of life I'm afraid and we're all part of it so maybe instead of letting your children watch Fantasia when they turn five, why not settle down with a hot glass of milk in front of the fire with a few choice exerts from 'Tales of Ordinary Madness' to give them that head start in life? 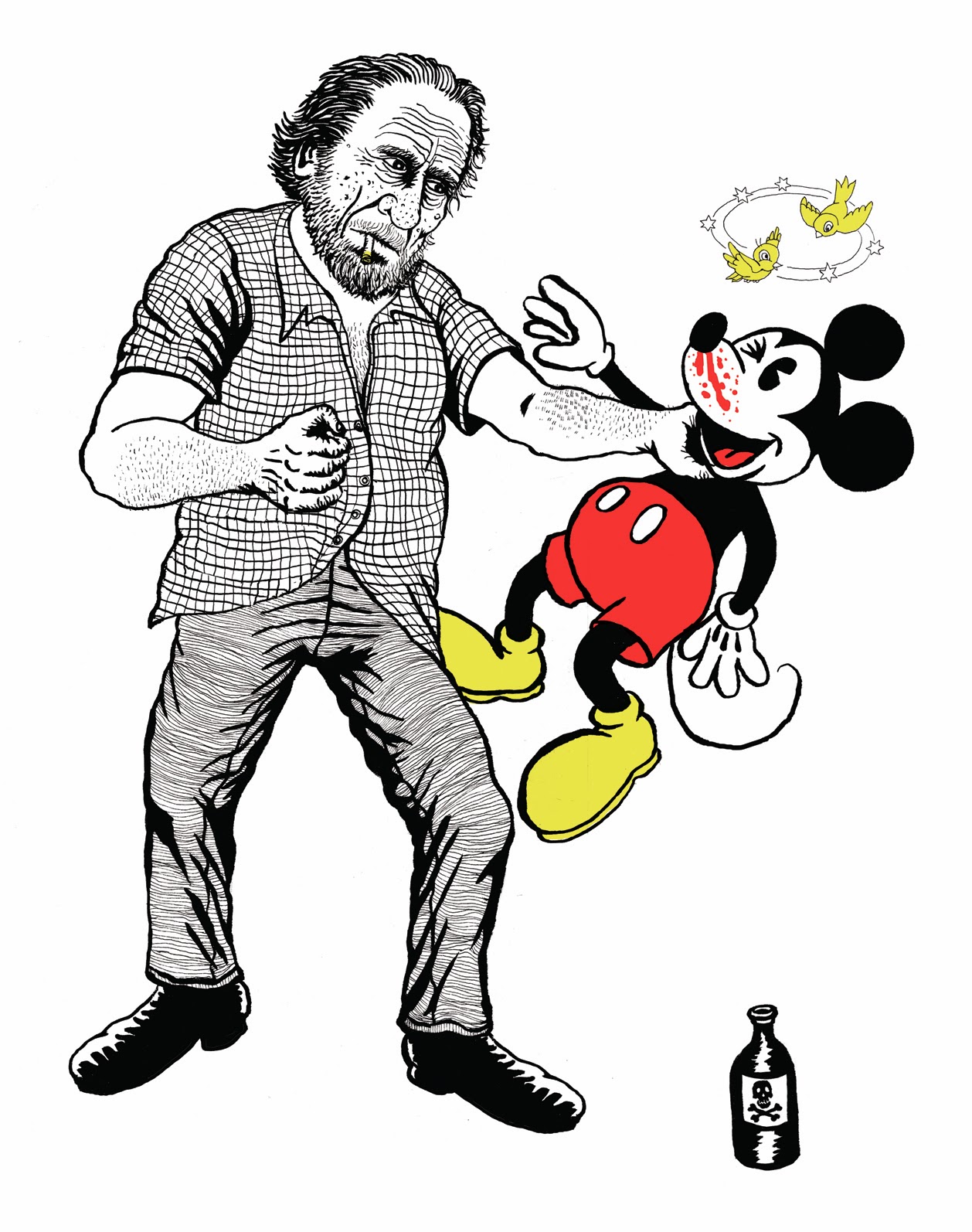 Bukowski vs The Three Fingered Bastard by Neal Fox

Posted by Sarah Crowder and Sophie Ioannou at 23:30 No comments:

Our gorgeous friend Katie-May Taylor gave us the recipe for this delicious cake, which I then wrote up and illustrated. The photos of the cake are also courtesy of Katie. 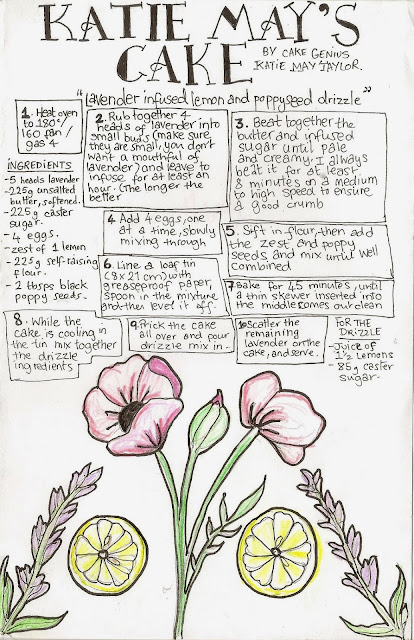 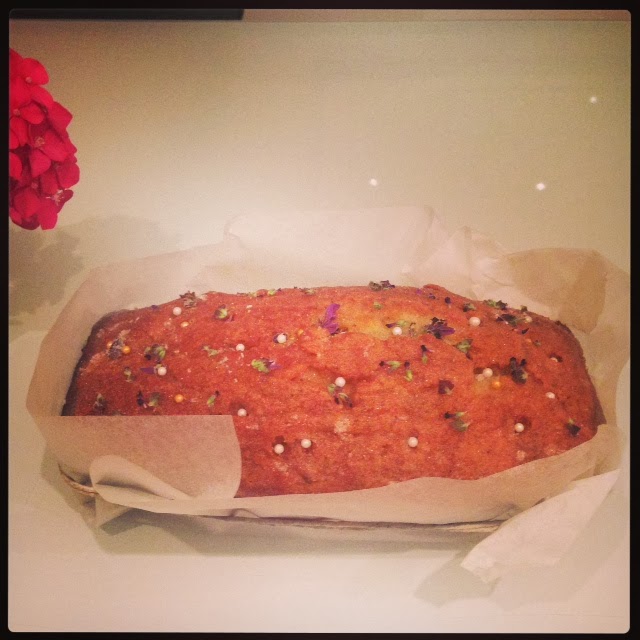 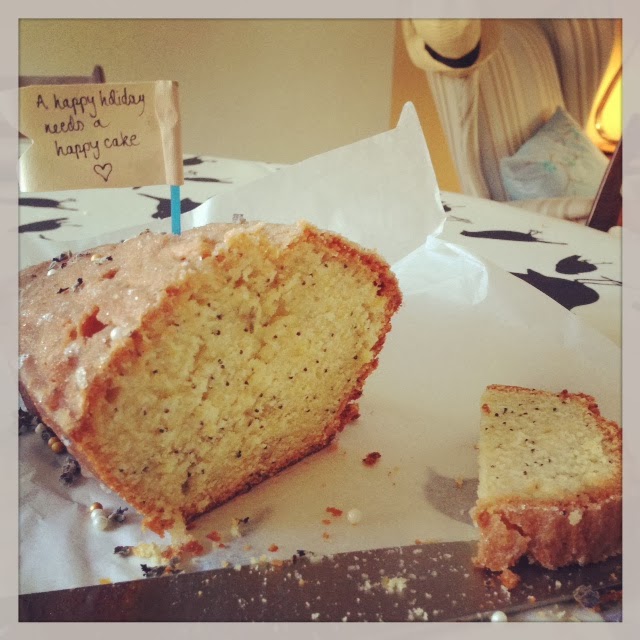 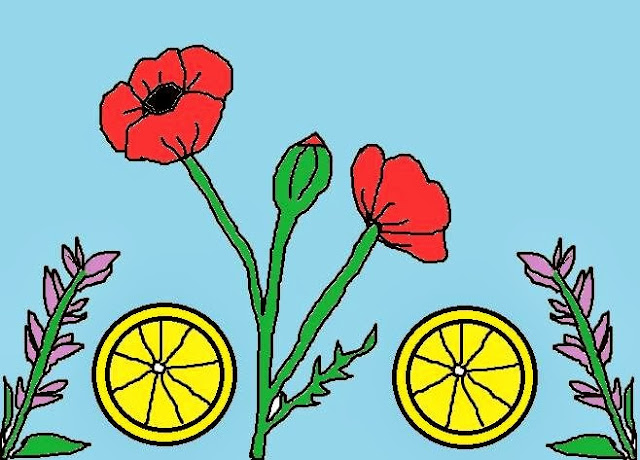 Posted by Sarah Crowder and Sophie Ioannou at 16:22 No comments: